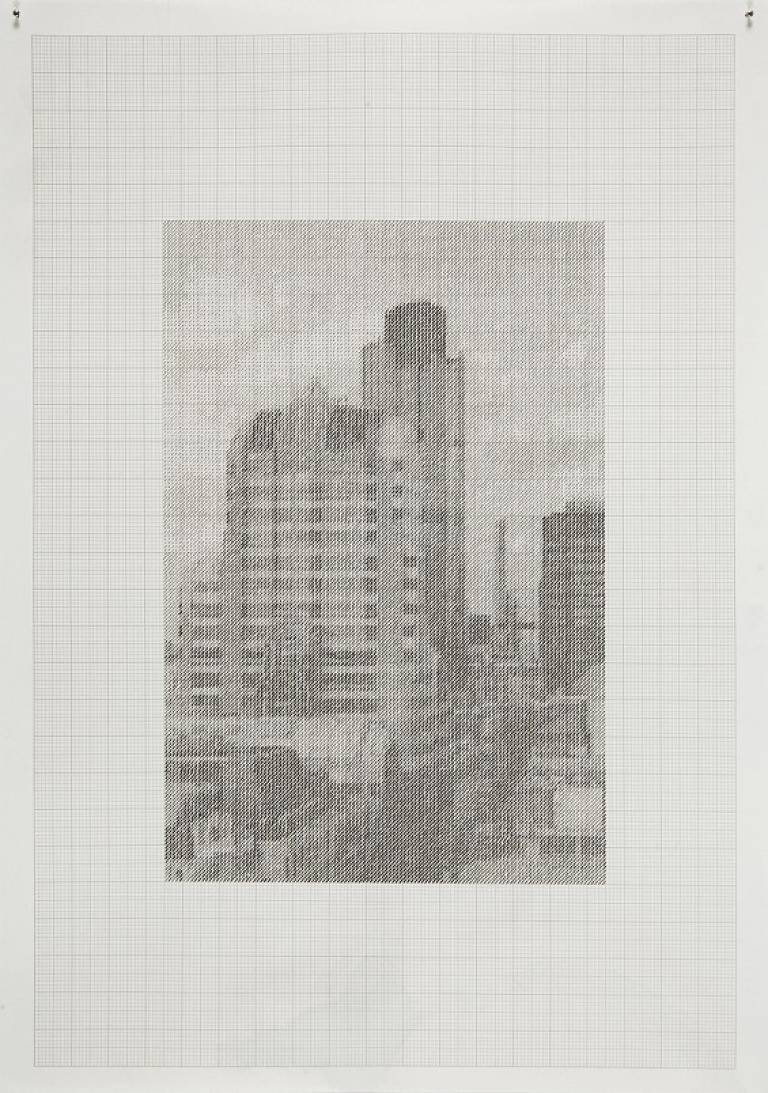 Ewan GibbsFrom the Monument (Towards Tower 42)

Pinned at upper corners to the back board as issued.

Private Collection, Los Angeles (acquired from the above).

A graduate of Goldsmiths' College, London, in 1996, in the second wave of Young British Artists under the tutelage of Michael Craig-Martin, Ewan Gibbs' unique style immediately caught the attention of the contemporary art world, culminating in his first solo exhibition at Maureen Paley's Interim Art in 1998.

He has since been consistently exhibited in solo exhibitions at Tim Taylor Gallery, London and Richard Gray Gallery, Chicago, amongst others, as well as multiple group exhibitions in museums and public spaces worldwide. His work is held in institutions such as Tate, London, MoMA, New York and MoMA, San Francisco.

Using photographs as reference material, Gibbs creates intricate pencil renderings of tourist sites and city scenes, composed entirely of a multitude of tiny slash marks on graph paper. Derived from knitting patterns, in which he varies the density of each mark to delineate light, shadow, and form, Gibbs draws these familiar topographical views into his world of partially-abstracted imagery. Using several pencils of varying densities, he marks each square of the graph paper with a single strike. Over several hundred hours of artistic labour, the factually accurate source material becomes pixellated, rendering its information blurred and obscure.

'From the Monument' is from a series of 15 drawings the artist produced from 2002-4. In it, the artist turns his lens in on itself, taking the iconic landmark of London's Monument (erected to mark the starting point of the city's Great Fire of 1666) as his viewpoint as opposed to his destination. He replaces the focal point with its surroundings (in this case the NatWest tower), turning the essence of topographical art inside out.